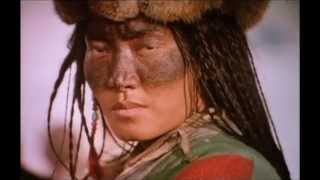 "This salt's mixed with earth!"
- Tinle (Thinlen Lhondup) to Karma (Gurgon Kyap) upon the salt caravan returning with Tinle's dead son.
"When he shouts, men and beasts bow their heads and walk."
- Pema (Lhapka Tsamchoe) to Norbou (Karma Tenzing Nyima Lama), referring to Tinle's (Thinlen Lhondup) leadership of the caravan.

It is caravan time in Dolpo, high in the Himalayas of Nepal. The villagers must trek for days across the mountains with laden yaks to trade their salt for grain. But when Karma (Gurgon Kyap) returns to the village with the body of Lhakpa, leader of the caravan and son of the old chief Tinle (Thinlen Lhondup), the new chief blames Karma for the death, and will not allow him to lead in Lhakpa's place. Though Tinle's grandson, Tserin (Karma Wangiel), is far too young to lead the tribe, Tinle simply renames him Passang--a chief's name--and prepares him to lead the caravan. Karma challenges Tinle, threatening to take away the yaks, Lhakpa's widow Pema (Lhapka Tsamchoe), and Passang before the day that the caravan begins. Old Tinle in turn visits the monastery to gather his son, Norbou (Karma Tenzing Nyima Lama), a frescoe-painting monk, to join him on the caravan. But Norbou refuses to join his father, and Tinle returns to the village to discover that Karma has left early, taking most of the caravaneers with him. Tinle, Pema, Passang, the late-arriving Norbou, and the old men of the village leave on the scheduled day, and leading their own caravan in an effort to end the rivalry that threatens every resident of Dolpo.