Beneath The 12-Mile Reef

Rival Deep sea fishermen fight for territorial rights as their teenage children bravely struggle to love each other in an atmosphere of violence and conflict. 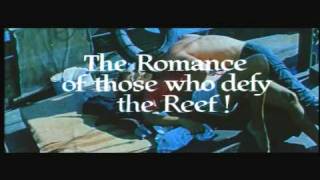 Young Robert Wagner undergoes a dangerous rite of passage in this undersea adventure that depicts the steadfast virtues of familial loyalty. Set in the Gulf of Mexico off the West Coast of Florida, Beneath the 12-Mile Reef chronicles the life of sponge fisherman Mike Petrakis (Gilbert Roland) and his cocksure son Tony (Wagner). Having little luck in their pursuit of sponges, Mike schemes to make an early morning voyage into the Key West waters controlled by the territorial Conch fishermen led by Thomas Rhys (Richard Boone). When the locals discover the "trespassing" Greeks, tensions arise between the families which become even more strained when Tony falls in love with Rhys' beautiful daughter Gwyneth (Terry Moore). Filmed on location, Beneath the 12-Mile Reef boasts vivid underwater scenes and crisp, breathtaking cinematography (which earned Edward Cronjager an Oscar nomination), as well as a haunting score by the renowned composer Bernard Herrmann. An uncredited Rock Hudson provides a brief narrative introduction in the opening sequences.

Romance sharpens a rivalry between two families of sponge divers in the Florida Keys. Unique only for the spectacular underwater scenes in Technicolor and CinemaScope. Academy Award Nominations: Best Cinematography (Color).

A stunningly photographed adventure film, set in the waters of Florida's Gulf Coast.
When his father dies during a particularly dangerous undersea expedition, a young Greek-American takes over his job as a diver. But the creatures of the ocean aren't the only threat to his life -- some humans may be equally deadly...

28%off
The Greatest Show on Earth
$6.50 Super Savings
Add to Cart

Customer Rating:
Based on 1721 ratings.


Gilbert Roland is in top form here - a role which ranges from brawling roughneck to the nearly poetical. He always looked like he was enjoying himself on screen and he certainly felt at home in this role. This transfer came from an Eastman color 16mm pan and scan (full frame) print which was in decent shape. The color at times is a little off, but I think we can blame the pre-print and not the transfer process. Since this title is PD, I doubt whether a real Technicolor and CinemaScope print will surface for a better film-to-DVD transfer. I was looking forward to the music by Bernard Hermann, but I was a little disappointed: adequate but not up to his work for Hitchcock or the sci fi films. Overall, well worth the price!