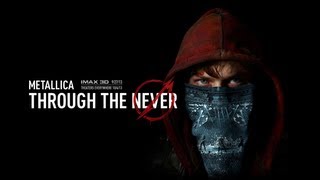 A young Metallica roadie named Trip (Dane DeHaan) embarks on an apocalyptic journey through a decimated urban landscape as the band plays to a sold-out arena crowd in this high-concept concert film from director Nimrod Antal (PREDATORS). As the band takes the stage before thousands of screaming fans, Trip is informed that a driver tasked with delivering a crucial item has gotten stranded on the other side of the city. It's his job to recover it, but getting there won't be easy because as the elaborate concert gets underway, rioters and police begin clashing in the streets. The city is burning, and a mysterious, masked figure on horseback is thriving on the chaos. When Trip incurs the wrath of the ruthless, hammer-wielding psycho and his marauding gang, he realizes that he may not live long enough to complete his mission. Meanwhile, the show must go on, and Metallica thrills the crowd with a thunderous collection of classics that include "Creeping Death", "Ride the Lightning", "Master of Puppets", "Battery" and "Enter Sandman.

Metallica
A Year and a Half in the Life of Metallica
$9.60 Super Savings
Add to Cart

Metallica
And Justice For All
$23.50
Add to Cart