Holmes and Watson are pitted against arch-enemy Professor Moriarty, who is planning to steal a top secret invention. 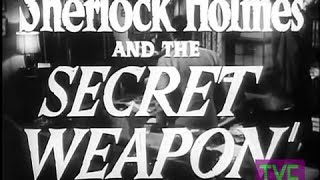 A Swiss scientist invents a bomb sight that may very well decide the outcome of World War II and Sherlock Holmes (Basil Rathbone) is chosen to protect the device and its inventor from falling into the hands of the Nazis. When the inventor is kidnapped, the trail leads to Holmes' old enemy, Professor Moriarity (Lionel Atwill), who plans to sell both the bomb sight and its inventor to Germany. Holmes and Dr. Watson must decipher a code left behind by the missing scientist that will lead them to the device before Moriarity. In this story of Second World War espionage and intrigue, writers Lowe, Darling and Hartmann, along with director Roy William Neill, deliver a Holmes who is as much a national asset in England's war against Germany as he is its greatest detective. Written to appeal to a wartime audience, the film turns the classic battle of wits between Holmes and Moriarity into one of patriotic good and evil in which the stakes are the freedom of the civilized world. Based On The Dancing Men By Sir Arthur Conan Doyle.

The secret weapon is a new bombsight which could hasten the outcome of World War II, and both the Allies and the Nazis are in a desperate race to secure it for themselves. Super sleuth Sherlock Holmes (Basil Rathbone) and his trusty assistant Dr. Watson (Nigel Bruce) are assigned to find the kidnapped scientist who developed the secret weapon, only to be foiled by Holmes' nemesis, the evil Professor Moriarty (Lionel Atwill). Based on the Sir Arthur Conan Doyle story THE ADVENTURE OF THE DANCING MEN, this Holmes case transplants the Victorian sleuth into the realm of WWII espionage and is also the first of the films to introduce Dennis Hoey as Scotland Yard detective Inspector Lestrade.

Sherlock Holmes and Doctor Watson once again set out to foil the nefarious Moriarty -- and save humanity in the process. This time they have to prevent a Swiss-made bomb from falling into the hands of the Gestapo. Unfortunately, Moriarty has captured the inventor... and will slowly bleed him to death, unless he reveals the secret behind his handiwork.

The Adventures of Sherlock Holmes (The Copper Beeches / The...
$12.98 on Sale
Add to Cart

The Adventures of Sherlock Holmes
$18.70 Super Savings
Add to Cart

The Woman in Green
$8.70 Super Savings
Add to Cart