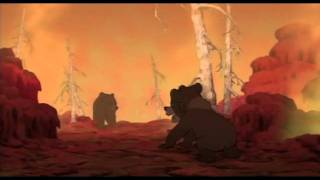 In Walt Disney Pictures' feature BROTHER BEAR, beautiful animation of the Pacific Northwest complements an upbeat musical score that includes songs by Phil Collins and Tina Turner. From snowcapped mountains and glaciers to lush springtime forest scenes, the colorful drawings are dazzling and dreamlike. Children will especially enjoy the animals in the film. There are rivers full of leaping salmon, forests inhabited by squirrels and chipmunks, and processions of giant wooly mammoths. The story carries messages about the power of friendship and community, the difficulty of losing a loved one, and the highs and lows of growing up. Kenai (Joaquin Phoenix) is a boy who longs to become a man but must learn a valuable lesson before he can achieve the maturity it requires. At a tribal ceremony the spirits give him the symbol of the bear, which stands for love. Then, through a series of events, he is transformed into a bear. Kenai must brave the wild, with only a little bear-cub brother, Koda (Jeremy Suarez), to guide him. In their travels, Kenai and Koda meet a couple of hilarious moose (Rick Moranis and Dave Thomas) who provide comic relief to this otherwise heartrending family tale.

Brother Bear
Disney proudly presents BROTHER BEAR, an epic animated adventure full of comedy and heart. With five great new songs from Academy Award winner Phil Collins (1999 Best Original Song, "You'll Be In My Heart," from TARZAN(R)), it's "pure Disney magic from beginning to end!" raves Clay Smith of Access Hollywood. When an impulsive boy named Kenai is magically transformed into a bear, he must literally walk in another's footsteps until he learns some valuable life lessons. His courageous and often zany journey introduces him to a forest full of wildlife, including the lovable bear cub Koda, hilarious moose Rutt and Tuke, woolly mammoths, rambunctious rams, and more! BROTHER BEAR is "a charming, enchanting story for kids of all ages!" ( Larry King, CNN)

Spirit: Stallion of the Cimarron
$14.50
Add to Cart

50%off
Superman and Other Cartoon Treasures (DVD)
$1.98 BLACK FRIDAY
Add to Cart