Angela is having a party, Jason and Freddy are too scared to come. But You'll have a hell of a time. 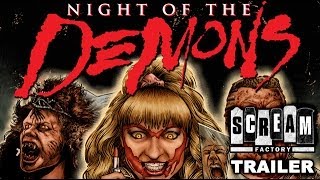 A Halloween night funeral parlor break-in by a group of prankster teens goes hellishly awry when they stir an evil force into action.

A group of adventurous teens decide to throw a Halloween party in a spooky funeral parlor, formerly the house of a mass murderer, and now said to be possessed by a demon. The kids, led by Angela and Suzanne, two strange babes with a taste for the macabre, hold a seance in which they succeed in calling up the resident demon. The monstrous spirit takes possession of the two girls and suddenly the Halloween party becomes a living hell as the terrified teens, pursued by the murderous, demonic duo, desperately try get out of the house alive.