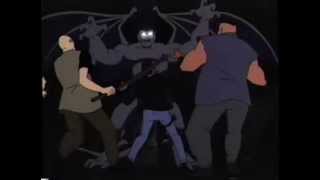 Troll-like, fearsome demons of the past turn into modern superheroes in this winning animated TV show. The GARGOYLES journey begins in 994 A.D. when architectural creatures mounted on the walls of a castle "sleep" in a frozen state during the day and engage in fierce battles at night. Though the gargoyles' main purpose is to protect the castle's inhabitants, they are misunderstood and hated by humans. A spell is cast to immobilize the gargoyles completely, turning them into creepy architectural forms that stand lifeless for ages. In 1994, a wealthy New Yorker buys the castle and decadently moves it to the top of his plush high rise. When the ancient spell is broken, the gargoyles suddenly spring to life in the Big Apple instead of the pastoral fields of the Old Country. This release, which features the 13 episodes of the first season of GARGOYLES, introduces these misunderstood superheroes and shows them adjusting to life in the fast lane.

Gargoyles: The Complete First Season
Experience all 13 thrilling episodes of GARGOYLES' first season in this spectacular 10th anniversary 2-disc DVD set, complete with exclusive bonus features. It's action-packed animation at its very best! For 1,000 years, a race of heroic creatures has been frozen in stone -- the victims of human betrayal. Now, with the magic spell broken, these amazing Gargoyles awaken from their slumber to find themselves transported from the moors of Scotland to the bustling metropolis of New York City. Follow each suspenseful episode to find out if this proud clan of winged warriors will seek revenge on the race that betrayed them.