The Hunchback of Notre Dame G 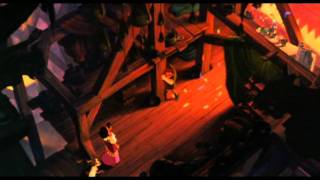 The Hunchback of Notre Dame (Clip)

The Hunchback Of Notre Dame
Inspired by Victor Hugo's classic novel, Disney brings the heroic adventures of Quasimodo, the gentle and lonely bell ringer of Notre Dame, to spectacular life. This critically acclaimed Disney masterpiece is an "uplifting, thrilling story with a heart-touching message that emerges from the comedy and song" (Roger Ebert, Chicago Sun-Times). At the urging of his hilarious gargoyle pals Victor, Hugo, and Laverne, Quaismodo leaves the solitary safety of his tower, venturing out to find his first true friend, the gypsy beauty Esmerelda. The most unlikely of heroes, Quasi fights to save the people and the city he loves and, in turn, helps us to see people for who they are, rather than how they appear. The star-studded voice cast includes Jason Alexander, Tom Hulce, Kevin Kline, and Demi Moore in a magnificent Disney musical from renowned composer Alan Menken.

The Princess and the Frog (DVD)
$19
Add to Cart