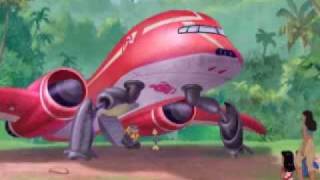 LEROY & STITCH is the feature-length conclusion of the LILO & STITCH: THE SERIES television show, and follows the further adventures of the genetically engineered alien Stitch and his human friend, the young Hawaiian girl Lilo. In this film the two must face an alien experiment gone awry in the shape of a creature that resembles a demonic bunny.

Leroy & Stitch
Here comes trouble! The adventure never stops as Lilo and Stitch face the challenge of their lives in Disney's hilarious, all-new movie LEROY & STITCH. As a reward for rounding up all 625 experiments, Lilo, Stitch, Jumba, and Pleakley have been placed around the galaxy in a spot where each of them thinks they truly belong. Their lives are all shook up when the dastardly Dr. Hamsterviel breaks out of prison and forces Jumba to create a new experiment -- Leroy, the evil twin of Stitch. To make matters worse, Hamsterviel soon clones the nasty little creature to form his own mischievous army. Now it's up to Lilo to gather Stitch and the rest of the gang from the far corners of outer space to battle the legion of Leroys. When the going gets rough, our friends discover that one place they all truly belong is together.

The Hitchhiker's Guide to the Galaxy
$6.60
Add to Cart