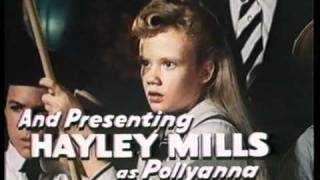 In this Walt Disney classic, which earned 14-year-old British actress Hayley Mills a special Honorary Academy Award for best Juvenile Performance, the imaginative, optimistic, and inquisitive orphan, Pollyanna Whittier comes to live with her cold, very wealthy Aunt Polly Harrington in 1912. Despite the many rules and roadblocks to happiness set up by her emotionally repressed relative, Pollyanna constantly searches for the small pleasures that brighten her life, and the lives of those around her. However, when something happens that finally threatens to kill Pollyanna's spirit for good, Pollyanna may need more than good will to overcome some harsh realities.

Pollyanna
Hayley Mills received a special Academy Award(R) for her performance as Pollyanna in this timeless Walt Disney tapestry of small-town Americana. Here you'll meet Pollyanna, the orphan who brings sunshine into the lives of everyone she meets. But her Aunt Polly (Jane Wyman) is too concerned with appearances, propriety, and local politics to appreciate her effervescent niece. It isn't until the town almost loses their "Glad Girl" that Aunt Polly realizes the power of love and lightheartedness. Featuring an impressive all-star cast and a story filled with fun, laughter, and tears, POLLYANNA will inspire your entire family and prove that the art of positive thinking is just as delightful today as it was at the turn of the century!