Saving The World One Playground At A Time 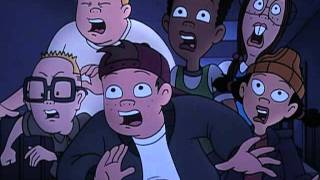 In this animated film from Disney based on the popular children's television show RECESS, the evil school principal Dr. Benedict is trying to eliminate summer vacation from the calendar. To do so, he has devised a way to alter the weather and make it perpetually winter. To help the save summer vacation, T.J. Detweiler gets the teachers and students to band together, determined to stop the principal's deranged plans.

Recess: School's Out
The Third Street Elementary School kids are teaming up to save summer vacation for kids all over the world in Disney's RECESS: SCHOOL'S OUT -- the hit theatrical movie that The Washington Post calls "Great Fun!" The school year is finally ending, and T.J. Detweiler is looking forward to summer. But boredom quickly sets in when his friends leave for camp -- until T.J. uncovers an evil plot to do away with summer vacation! A crazy former principal, Dr. Benedict, is planning to use a laser beam to alter the weather and create permanent winter. Faced with the dire threat of year-round school, T.J. rounds up the RECESS gang and bands together with some unexpected allies -- Miss Finster and Principal Prickly -- in a nonstop adventure to save everyone's summer break. As the kids discover the heroes inside themselves, a platoon of wacky characters, far-out music, and sci-fi surprises turn this madcap mission into a major victory for fun!