Eat, drink and try not to kill each other 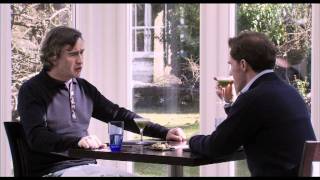 Box Office - 05/02/2011
4 stars out of 5 -- "[A] comic road trip through northern England....The longtime friends and collaborators play fictional versions of themselves in a mostly improvised and revealing portrait of middle-age angst."
Los Angeles Times - 06/10/2011
"[T]heir travels and squabbles are great fun to watch, the countryside is bucolic, the food mouthwatering."
Wall Street Journal - 06/10/2011
"The cream of the jests comes when Steve and Rob exchange impressions of Michael Caine."
Entertainment Weekly - 06/17/2011
"[A] hilarious and touching road movie....There's a sneaky resonance to the way it celebrates what acting means to these two rogue cutups."
Chicago Sun-Times - 06/15/2011
3 stars out of 4 -- "[T]he two actors are gifted mimics....Brydon does a virtuoso impression of Caine's voice evolving from his early days in THE IPCRESS FILE through decades of whiskey and cigars into its present richness."
New York Times - 06/16/2011
"[A] British road movie laced with lacerating laughs....Mr. Coogan has made a career partly by riffing on narcissism and he's in fine self-loving form, as is Mr. Brydon."
Movieline - 06/09/2011
"Brydon and Coogan spar about everything and nothing and somehow end up covering all the bases. What emerges is a cracked puzzle-piece montage of what it's like to suddenly feel middle-aged..."

Steve Coogan and Rob Brydon reprise their roles from Michael Winterbottom's TRISTRAM SHANDY: A COCK AND BULL STORY for this tale of a restaurant critic who reluctantly invites his obnoxious best friend on a business trip through the English countryside. Tapped by The Observer to review fine restaurants throughout the Lake District and Yorkshire Dales, Steve (Coogan) finds himself without a traveling companion after his girlfriend decides not to go at the last minute. After being turned down by everyone he knows, Steve extends an invitation to Rob (Brydon), and together the pair attempts to navigate the winding back roads of rural England, impersonating popular celebrities and bickering endlessly along the way.