The Secret of Roan Inish

Between land and sea there is a place where myths are real. 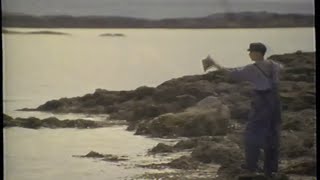 "The sea gives and the sea takes away."
- Grandfather (Mick Lally) to Fiona Coneelly (Jeni Courtney)
"Once a selkie find its skin again, neither chains of steel nor chains of love can keep her from the sea. From that day on, it was forbidden to harm a seal on the island."
- Tadgh Coneelly (John Lynch) to Fiona

Sent to live with her grandparents in a quaint coastal Irish town, 10-year-old Fiona (Jeni Courtney) is fascinated by the village's rich folk culture--especially the local myths about a half-human, half-seal creature known as a selkie. Fiona becomes convinced that her supposedly deceased little brother is living with the selkies, and she travels to the beautiful, enchanted island of Roan Inish, where her grandparents once lived, to confirm her suspicions.

Based on the book SECRET OF RON MOR SKERRY by Rosalie K. Fry, the film is the first John Sayles picture shot outside the United States. Although the magical realism of the film may seem like a departure for Sayles, who is known for gritty slice-of-life dramas, he has covered fantastic elements before (BROTHER FROM ANOTHER PLANET), and has dealt extensively with the theme of returning to one's roots (BABY IT'S YOU, RETURN OF THE SECAUCUS SEVEN, and PASSION FISH). The film will particularly appeal to children and adults who grew up listening to stories rather than watching them on television, and the special effects--including a magical transformation of a seal into a woman--are meant to replicate the imagination of a rural child unfamiliar with the excesses of mass media. With its gorgeous photography and perfectly paced storytelling, THE SECRET OF ROAN INISH stands as one of the finest folklore-based films ever made.

Set on the remote west coast of Ireland, this gentle film follows the adventures of a little girl who's driven to explore the site where her little brother was swept out to sea years earlier and who may have been raised by seals. The film is a quiet, enchanting fairy tale from American director John Sayles.

50%off
Divas of Gospel: Reach For the Heavens
$5 BLACK FRIDAY
Add to Cart