A beautiful woman falls under the spell of the supreme ruler of the criminal underworld, Pepe Le Moko. This is Charles Boyer's greatest romantic role. 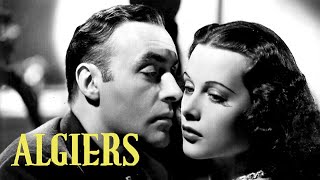 This Hollywood remake of the French film Pepe le Moko features Charles Boyer as the master criminal hiding out in The Casbah. Pepe's nemesis, French police inspector Slimane, waits patiently for Pepe to make one wrong move. When Pepe falls head over heels in love with the beautiful tourist Gaby (Hedy Lamarr, in her first American film), he becomes too preoccupied to keep up his guard against the relentless inspector. An intriguing chain of events, including his betrayal by the woman (Sigrid Gurie) he scorned in favor of Gaby, conspire to create Pepe's heart-rending downfall. The dramatic ending is legendary, and the mysterious, murky Casbah is a perfect backdrop for this riveting tale of love, passion and greed.

In John Cromwell's ALGIERS, based on the 1937 adaptation of Roger D'Ashelbe's popular French novel PEPE LE MOKO, a renowned thief has been hiding from police in the Casbah, the native quarter of Algiers, for more than two years. Inspectors Slimaine and Louvaine (Joseph Calleia and Walter Kinsgsford) see Pepe Le Moko (Charles Boyer) repeatedly, but until he strays outside the Casbah they are powerless to arrest him. Then a member of Pepe's inner circle, worried about his own safety, rats Pepe's hideout location to the police while simultaneously warning Pepe about the breach. Pepe and numerous bystanders, including attractive Gaby (Hedy Lamarr), are wounded as the band of thieves narrowly escapes the police. Gaby and Pepe begin to fall in love as the schemes to ensnare the master criminal grow deeper and more devious. This suspenseful romantic thriller, a Hollywood classic, features fine performances, a quality score, and excellent cinematography by James Wong Howe.

Master thief Pepe Le Moko has eluded jail by staying deep within the recesses of the Algerian Casbah where police won't pursue him. But when a beautiful European woman arrives and wins his love, his enforced captivity becomes oppressive.

For Whom the Bell Tolls
$10
Add to Cart

Customer Rating:
Based on 3402 ratings.


Charles Boyer's artistic interpretation of the character Pepe Le Moko is wonderful. As you watch the movie, you are able to enter the mind of Pepe through the magic of the camera movements. You can see the criminal mind in Pepe gloat over the jewelry worn by Hedy Lamarr, and then feel the discovery of Pepe's attraction to her character, as he studies her pristine, sultry beauty. "Algiers" is a very fine film.