A man is told he's been lethally poisoned and in his remaining hours tries to find out who "killed" him in this all-time film noir classic. 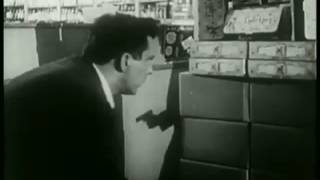 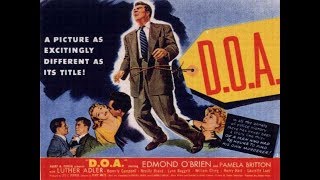 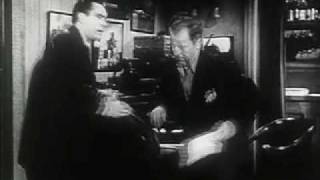 "I don't think you fully understand, Bigelow. You've been murdered." (Doctor to Frank Bigelow)
"He's not afraid, Chester. You can tell from a man's eyes when he is afraid. Look at his eyes." (Majak to his gunsel Chester)
"All I did was notarize a bill of sale..." (Frank Bigelow)

A doomed man races against time to find out who poisoned him in this classic film noir. Accountant Frank Bigelow (Edmund O'Brien) arrives in San Francisco for a brief vacation and visits a local dive, the Fisherman's Club, where a mysterious stranger slips him a mickey of "luminous toxin" that leaves Bigelow with less than a week to live! In a desperate attempt to locate his murderer, Bigelow embarks on a lurid odyssey of double-dealing, betrayal and murder that leads to a nightmarish climax.

This famous film-noir murder mystery features an inventive twist: the victim as "detective," desperately trying to solve his own murder. An accountant on vacation in San Francisco gets a dose of lethal, slow-acting poison. He then begins a desperate search for the individual responsible for his impending demise. Irresistible plot given remakes in 1969 as COLOR ME DEAD, and in 1988 starring Meg Ryan and Dennis Quaid.

Customer Rating:
Based on 10996 ratings.


D.O.A. released in 1949, 83 minutes, directed by Rudolph Mate is one of those films you watch with that fatalist feeling in your stomach, much like the character Frank feels in the film.

Frank Bigelow (Edmond O'Brien) begins his tale by walking into a Police Station and telling a detective "I want to report a murder...mine." The flashback shows how he takes a vacation in San Francisco from his job as a CPA to be targeted and poisoned with luminous chemical called iridium. Told that he only has 24 hours to live Bigelow desperately retraces his steps trying to locate his murderer and along the way runs into a gang of criminals who have used a shipment of iridium for a crime. Bigelow becomes a target for elimination because he notarized a shipment of the poison and, by association, is a witness to the crime. Even though we know from the beginning that our lead character is in his own final act, the story grips us with the simple need to know the truth and follow our storyteller as he finds out who has murdered him. The film has a wonderful existential weight to it as a "dead" man goes through the motions to find his killer.

The script is a well-wrought tale by Russell Rouse and Clarence Green. Two years later Russell Rouse would direct Ray Miland in the very special noir film The Thief, a project that Clarence Green produces, a dialogue-less thriller about government secrets stolen and sold to a foreign power.

Some excellent scenes in D.O.A. include the moments after Frank discovers from a doctor that he will die in 24 hours, he starts running to nowhere down the streets of San Francisco as Dimitri Tiomkin's music swells underneath. It is an emotional release for us as well when Frank stops and takes control of his life and begins taking the steps to track down the culprit responsible for his death.

Edmond O'Brien is perfectly cast as Frank Bigelow, as is Pamela Britton as the clinging, passive-aggressive Paula Gibson. Their relationship shows all the dangers we?ve heard of from dating on the job. Neville Brand turns in a great perf as the maniacal Chester.


A truly great crime thriller from start to finish. You can't go wrong with this one, and the print quality is superb. Alpha have done a top-knotch job here. Definately worth the purchase!! I'm glad I got this.


Edmond O'Brien probably got more exercise making this film than during his entire life. This poor guy is running all over California trying to find out who done it and the why of his poisoning. His clingy girl friend is perfectly annoying (I was hoping she'd get hit by a bus in 'Frisco); the evil-doers, red herrings and innocent bystanders are perfectly cast(especially Neville Brand); and Edmond O'Brien is pretty tough and resourceful for an over-weight businessman from Arizona (or is it Nevada?). A fantastic race against time and one of the most engrossing dramas you'll ever see on film! In glorious black & white.