The story of Abraham Lincoln that has NEVER been told!

9.3K ratings
Currently Out of Stock: We'll get more as soon as possible
Notify Me When Available
Add to Wishlist
Format:  DVD  (2 Discs)
sku:  6GH3H
Our customers love us! 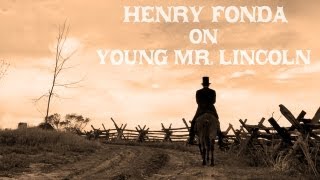 John Ford's film on the early career of Abraham Lincoln, which centers on an apocryphal murder trial, impressed even the great Sergei Eisenstein. It stars Henry Fonda as the title character, who opts for the law after receiving encouragement from his early, ill-fated love, Anne Rutledge (Pauline Moore). Too poor to own even a horse, he arrives in Springfield on a mule and soon establishes a law practice with friend John Stuart (Edwin Maxwell). At a July 4th celebration, a man is murdered in a brawl, and the accused are Matt and Adam Clay (Richard Cromwell and Eddie Quillan), two brothers of a family that Lincoln knows. After saving the two men from a lynch mob, Lincoln becomes their defending attorney, a difficult task since each man claims guilt to spare the other. Admiring his courage, Mary Todd (Marjorie Weaver) invites him to her sister's soiree and expresses an intense interest in his future. More pressing is his meeting with Abigail Clay (Alice Brady), who understandably refuses to tell Lincoln which of her sons is the killer. Although entirely fictional, Ford's fable conveys the essence of the great man's character: honesty, humor, wisdom, and a shrewdness that knew how to take a back road to reach the high road. A triumph of acting, writing, and direction, YOUNG MR. LINCOLN features one of Fonda's greatest screen performances.

This biography provides a glimpse into the fascinating life Abraham Lincoln led before he became a politician, focusing especially on Lincoln's prowess in his first career as a lawyer as he defends two brothers accused of murder in what becomes a very incendiary trial.

49%off
My Darling Clementine
$7.69 Spring Sale
Add to Cart

Far from the Madding Crowd
$5.59 Spring Sale
Add to Cart

26%off
Abe Lincoln In Illinois
$9.60 Spring Sale
Add to Cart