This time, it's not just a walk in the park! 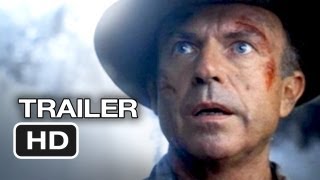 Paleontologist Alan Grant (Sam Neill) has sworn never to return to Jurassic Park. But he needs funding for his research, so when a wealthy thrill-seeking couple (William H. Macy and Téa Leoni) come calling, Grant and his protégée, Billy (Alessandro Nivola), agree to take them on a sightseeing flight. By the time Grant finds out what their true purpose is--to land on the island and search for their missing son--all of their lives are in peril. And Grant's newfound theory about Raptor intelligence will have its deadly proof.

Joe Johnston was the right director to take over Steven Spielberg's JURASSIC PARK series. He's experienced with special effects, having worked on the STAR WARS films, while his OCTOBER SKY demonstrates his skill at telling an emotionally involving tale. In JURASSIC PARK 3, with the help of a top-notch technical team and a talented cast (who began filming before the script was finished, improvising much of their dialogue), and a new dinosaur, Spinosaurus, that makes even T-Rex nervous, Johnston has fashioned a rousing adventure with state-of-the-art visuals. Clocking in at a tense 92 minutes, it's the fastest-moving, most action-packed film of the series.

20%off
Jurassic Park Collectibles
$19.98 on Sale
Add to Cart