The Man Who Killed Hitler and then the Bigfoot (Blu-ray) 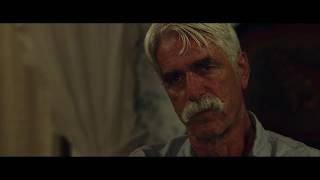 Chicago Sun-Times - 02/07/2019
"[A] perfect vehicle for Elliott’s legendary persona as the guy with the growling delivery and the don’t-mess-with-me aura who just might have a warm heart beating beneath all the machismo."
Hollywood Reporter - 01/31/2019
"Robert Krzykowski, a comic book artist turned filmmaker, channels his affection for B-movies and mythic themes into a meditation on the nature of heroism in his feature debut."
Variety - 07/25/2018
"[T]here are glimmers of humor here..."
Empire - 04/15/2019
3 stars out of 5 -- "[A] strangely melancholic piece anchored by a strong Sam Elliott performance as a man haunted as much by regret as Nazis and Yetis."

Calvin Barr (Sam Elliott), who fought during WWII, is an unsung hero responsible for saving the world from one of the biggest tyrannical rules in history. Ending the war, he was able to infiltrate the Nazi ranks and assassinate Adolf Hitler. Years after his service, he finds himself being forced out of retirement by the FBI to save the world again. With Bigfoot wandering Canada and carrying a dangerous plague, he has to stop the creature before it's too late. Written and directed by Robert D. Krzykowski.

Box of Bigfoot: Hillbillies vs. Sasquatch (The Barbaric...
$8.70 Super Savings
Add to Cart

63%off
Chasing Bigfoot: The Quest for Truth
$5.58 Winter Sale
Add to Cart