The Most Dangerous Game

A crazed hunter kills human beings for sport in this classic film from the makers of King Kong. 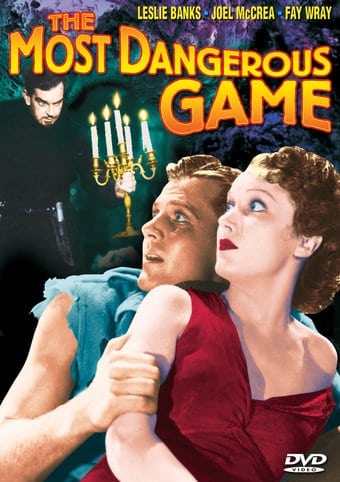 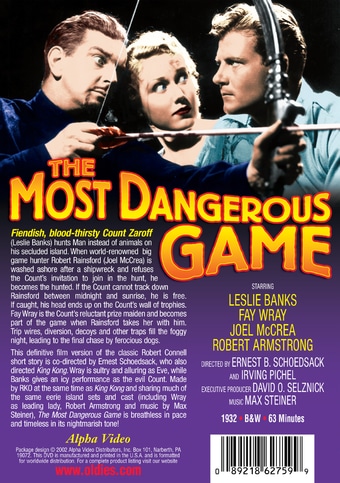 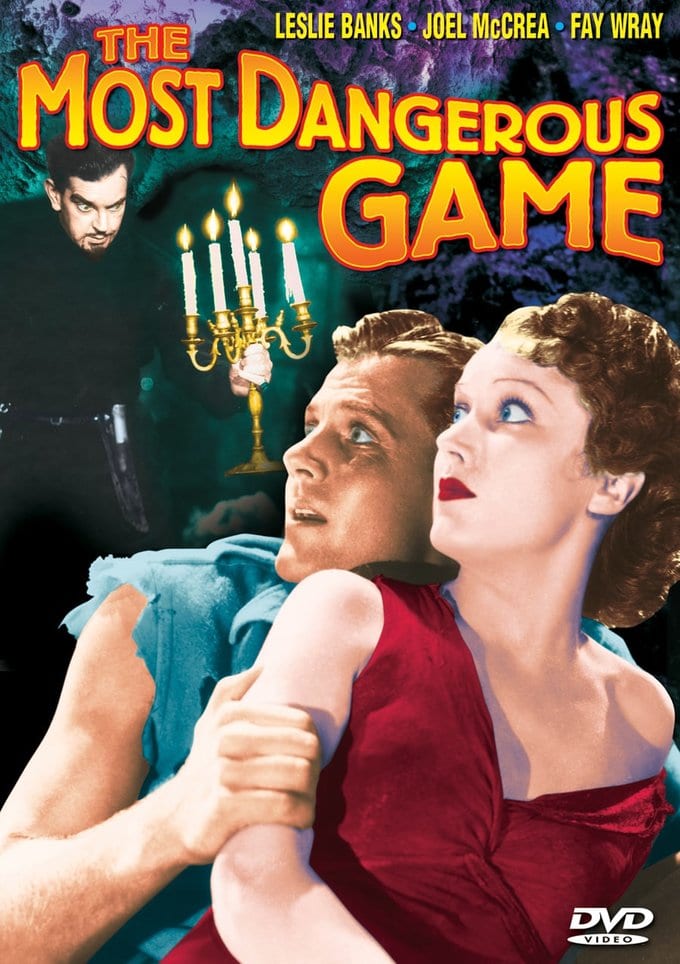 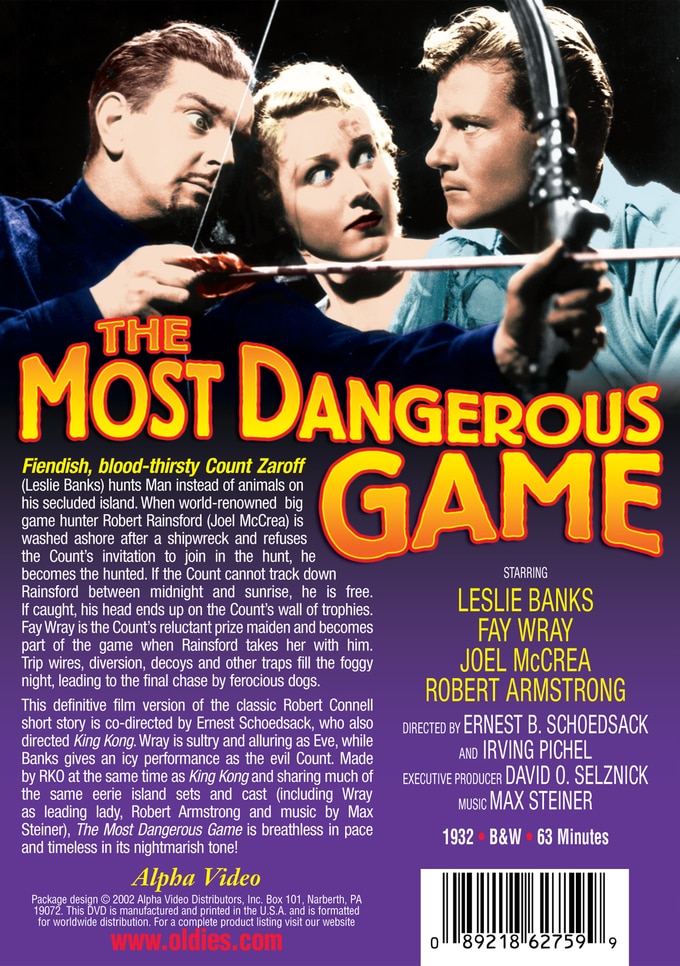 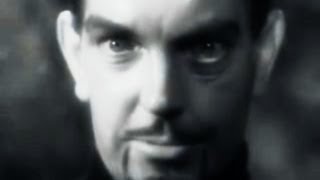 The Most Dangerous Game Trailer (1932)

Fiendish, blood-thirsty Count Zaroff (Leslie Banks) hunts Man instead of animals on his secluded island. When world-renowned big game hunter Robert Rainsford (Joel McCrea) is washed ashore after a shipwreck and refuses the Count's invitation to join in the hunt, he becomes the hunted. If the Count cannot track down Rainsford between midnight and sunrise, he is free. If caught, his head ends up on the Count's wall of trophies. Fay Wray is the Count's reluctant prize maiden and becomes part of the game when Rainsford takes her with him. Trip wires, diversion, decoys and other traps fill the foggy night, leading to the final chase by ferocious dogs. Wray is sultry and alluring as Eve, while Banks gives an icy performance as the evil Count. Made by RKO at the same time as King Kong and sharing much of the same eerie island sets and cast (including Wray as leading lady, Robert Armstrong and music by Max Steiner), The Most Dangerous Game is breathless in pace and timeless in its nightmarish tone!

After a shipwreck, a big game hunter washes up on a remote island only to discover that its owner, also a hunter, has tired of tracking animals and has developed a taste for a new prey...humans. Co-Director Shoedsack performed the same duty on KING KONG, as did producer Cooper. The film also used the same jungle sets and star Wray. Based on Richard Connell's famous, oft-filmed story.

Count Zaroff, a megalomaniac big game hunter, bored with shooting animals, has turned his attentions to other prey: human beings. He has yet to lose one of his unfair competitions (his less-than enthusiastic participants are armed with only a knife, while the Count is allowed a high-powered rifle) and eagerly waits for the next unfortunate soul to get shipwrecked on the small island he calls home. However, the Count doesn't expect to meet a man like Robert Rainsford, who proves to be more than a worthy match for the mad hunter.

The Devil and Daniel Webster
$34.50 Super Savings
Add to Cart

Customer Rating:
Based on 15857 ratings.


As it should. Made at the same time and on many of the same sites as "King Kong". and featuring some of the same cast, this film is a fastpaced thriller about an evil count (Leslie Banks) who hunts the "most deadly game" - man. He's after Joel McCrea, a shipwrecked hunter himself, and Fay Wray - the most wonderful screamer who ever lived. Some lines are a little hammy at times and Banks tends to be too evil but, by and large, it's an exicitin way to spend a little over an hour! (And the swamp and the tree over the gorge? If youve seen the original King Kong - and who hasn't - you'll recognize them.)


Fine, thrilling film still hasn't lost it's atmosphere. McCrea is good as shipwrecked man hunted by the evil Banks. Banks gives an impressive performance and Wray is campy and fun to watch, as usual. You get to check out some of RKO's pre-King Kong sets, too!

Excellent in every way! Movie Lover: Dan Nather from Cincinnati, OH US -- November, 5, 2004


First of all, I can't believe how good this print looks. Hardly a blemish anywhere, splendid contrast and depth of focus -- you can almost reach out and touch things, it's that sharp and clear.

Leslie Banks plays the mad Count Zaroff to perfection. Although the idea of men hunting men is naturally repugnant to us all, Zaroff really makes it sound plausible and even fun -- "outdoor chess," he calls it. And that in itself is scary.

As the shipwrecked big-game hunter Rainsford, Joel McCrea is Everyman writ large, and Fay wray is the prize awaiting the survivor of the mad hunt. Writing, cinematography, and direction are all top-notch. You'll love this incredible bargain DVD from Alpha!

The Most Dangerous Game Movie Lover: henri donadille from clamart, Hauts-de-Seine FR -- May, 8, 2004

The greatest and most suspenseful "shorter" films from that period or any other! McCrea, Wray and Banks are all excellent in their respective roles as "the hunted" and the "hunter". Great special effects and many pre-"King Kong" jungle sets make it an absolute must. A well deserved classic!


Leslie Banks is masterful as a psychopathic Great White Hunter in this tense, atmospheric thriller. Cultured, ingratiating, threatening, mad...Banks handles his character's transitions seamlessly. He makes it look so easy...and makes the insane logic of his character sound sooo rational. Joel McCrae is absolutely perfect in the heroic role and as Banks' nemesis in love and the hunt. One of the most entertaining and coherent "horror" films from the 1930's. Kudos again to Alpha for adding this gen to their catalog.


Wowie-Zowie! This is the best looking print of this movie I have ever seen. Filmed on the sets used for "King Kong" this is the classic tale of man hunting man (and Woman) just for the sport of it. It is a suspense-thriller on a jungle like island with no place for the joel Mcrea and Fay wray to hide from Leslie Banks and his hunting hounds. The scene in Bank's trophy room is horrific. Picture and Sound qaulity on this dvd is the best. RKO did this one right and Alpha did it justice. For a dvd in the 5-10 dollar range, this one is a steal.

Reviewed by Rick Rogers, lifelong movie fanatic who was raised in a movie theater and grew up watching these classic films on the big screen.