The Mike Tyson Mystery Team is back for more hilariously banal mystery solving. 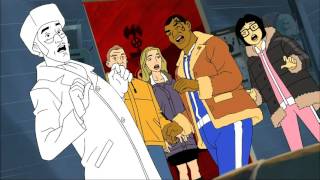 In season two of the animated adult comedy series the team is back for more mystery solving. Mike Tyson, once the "baddest man on the planet," remains hell-bent on becoming the "goodest man on the planet"...one mystery at a time. But he can't do it alone. Enter the best mystery-solving team in the business: There's Yung Hee, Mike's adopted Korean daughter; all-around buzzkill Pigeon, a filthy, disgusting man trapped in the body of a filthy, disgusting bird; and Marquess, the ghost whose sole mission is to keep Mike on the path to redemption. His other sole mission: finding a Pinot Grigio that's bold but has a crisp finish.

Your Pretty Face Is Going to Hell - Season 1
$13.70 Super Savings
Add to Cart