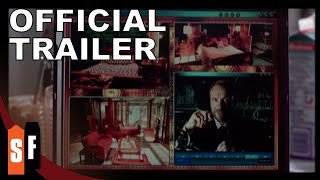 13 GHOSTS, Steve Beck's feature debut, is the second recent remake (following THE HOUSE ON HAUNTED HILL) of a film by 1950s and '60s camp horror king, William Castle. Arthur Kriticos (Tony Shalhoub) is a financially strapped widower struggling to raise two children, Kathy (Shannon Elizabeth) and Bobby (Alec Roberts), after losing his wife in a house fire. A stroke of apparent luck arrives when Arthur learns he has inherited a mansion from his mysterious Uncle Cyrus (F. Murray Abraham). Ecstatic, Arthur whisks the kids and nanny, Maggie (Rah Digga), off to their new home, a bizarre glass and steel structure with strange Latin inscriptions carved on the walls. The family is thrilled, until a psychic and former employee of Cyrus's, Rafkin (Matthew Lillard), reveals that Arthur's departed uncle was a power hungry ghost collector who captured twelve spirits in the house. Arthur is skeptical. But when his children disappear, and Rafkin gives him a pair of special glasses that allow him to view the house's gruesome inhabitants, he believes. In Beck's special effects-laden gore-fest, the two men race against time to find the children as the house's strange internal mechanism begins sealing off the exits and freeing the angry ghosts.