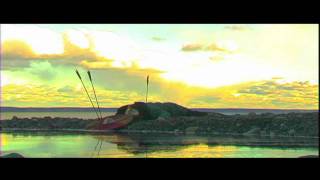 In the 11th century, two Norse warriors are abandoned by their comrades in the wilderness of North America. They embark on a treacherous walk to their homeland, deluding themselves that if they somehow make it back, their journey will be written into the legends of their people. The effort of writer-director-producer-editor-star Tony Stone to make this semi-epic film on a near-zero budget is a worthy celebration of such aspiration in the face of impossible odds.

The film certainly shows the marks of an ambitious amateur: sparse, dubbed dialogue; relentless, invasive music; and digitized visuals, such as showcase shots of fractionated sunlight and slow-motion snowfall. But the depicted actions of the characters reveal enormous care and preparation by the cast and crew. The narrative features multiple sequences of singular kinetic events (each of which were shot in a single take), as the men laboriously hack down trees and construct a shelter, sharpen spears and use them to fish, and burn a Christian church built by similarly stranded Irish monks. The film may be honored with comparisons to Werner Herzog's AGUIRRE, WRATH OF GOD, another low-budget epic featuring armor-clad men trekking through a wondrous, dangerous wilderness. But whereas Herzog's film demonstrates a devotion to realism and stillness, Stone employs constant stylization to direct the audience's attention rather than allowing viewers to make their own discoveries in his shots. This cinematic habit, along with the heavy metal soundtrack and the sporadic chapter titles, clashes with the unique naturalism of the wilderness survival scenes. However, such flaws are overshadowed by the courageous intentions behind them, making this a memorable film worthy of critical respect.

In the 11th century, Vikings, Indians, and Irish monks collide on the shores of North America in a historical epic adventure of exploration, personal glory, and religious dominance. Abandoned by a Western exploration party and stranded in the New World, two lone Vikings wade through a grand primeval landscape, struggling for survival while still in the grip of their Norse ways. An impressive DIY epic, SEVERED WAYS features a frosty black metal soundtrack, including Burzum, Morbid Angel, Judas Priest and Dimmu Borgir.