Greatness is a state of mind.

45K ratings
Currently Out of Stock: We'll get more as soon as possible
Notify Me When Available
Add to Wishlist
Format:  Blu-ray
sku:  EWW6
Our customers love us! 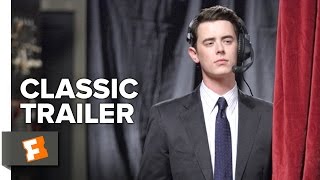 Prior to THE GREAT BUCK HOWARD, writer-director Sean McGinly helmed TWO DAYS, a film that deals with themes of show-business failure. McGinly treads similar territory here, but whereas DAYS mixed dark comedy and tense drama in the internal struggle of a man who merely thinks he's a failed entertainer, BUCK is a gentle charmer about a bona-fide washed-up star.

When sensible but jaded law student Troy Gabel (Colin Hanks) decides that school isn't for him, he takes off without telling his father (Tom Hanks, whose presence underscores how many mannerisms he and his real-life son have in common) and looks for the job that will get him a proverbial foot in the door of the entertainment industry. In the blink of an eye, Troy finds himself as road manager for the Great Buck Howard (John Malkovich), an aging mentalist in the tradition of the Amazing Kreskin. He may be a corny relic with an act full of piano interludes and lo-fi theatrics, but he's also pretty entertaining and genuinely impressive, especially his signature bit in which he locates his own hidden payment. He's prone to throwing prima-donna fits and blathering on about his 61 appearances on THE TONIGHT SHOW while he regularly performs to half-full rooms; but every time he screams "I love this town!" to the audiences of Wausau, Wisconsin, and Bakersfield, California, it becomes increasingly apparent that he means it. Buck is the best showcase for Malkovich's hilarious eccentricities since BEING JOHN MALKOVICH. But seen through the eyes of McGinly's semi-autobiographical Troy and a perceptive publicist named Valerie (Emily Blunt), he's more than just a caricature: his brief, hipster-irony-propelled resurgence as a national celebrity and the movie's lighthearted satirization of Hollywood suggest he's the kitschy, infantile heart of every entertainer.

Buck Howard (John Malkovich), a mentalist extraordinaire, used to spend his days in the limelight. But nowadays, it's clear to everyone but Buck that his act has lost its luster. Yet, Buck is convinced his comeback is imminent. With the help of his new personal assistant, a recent law school drop-out and would-be writer Troy (Colin Hanks) and a fiery publicist (Emily Blunt), Buck surprisingly lands back in the American consciousness, taking Troy along for the ride of his life.