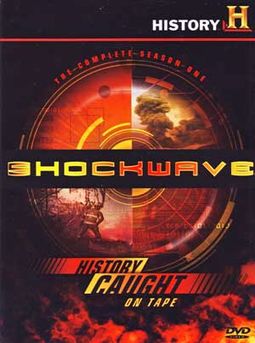 Every episode of SHOCKWAVE offers remarkable footage of events that must be seen to be believed. Often captured by amateur cameramen, the powerful videos in this collection let viewers witness the planet's most amazing spectacles, including natural disasters, explosive military catastrophes, and bizarre human accidents.

A hiker stranded on Mt. Hood is about to be saved when his rescue helicopter suddenly crashes into the mountain, and the disaster is captured live on video. A missile misfires on the USS Forrestal, careening into the fighter planes on deck, and the action is recorded in real time. From a catastrophic bridge collapse in Minneapolis to a tourist in Oahu being dragged out to sea, headline-making events around the world are increasingly caught on tape, by cell phone, on surveillance systems, or by the occasional lucky news cameraman.
SHOCKWAVE, a groundbreaking new series, reveals the best of this raw footage. Using the latest digital technology, HISTORY analyzes these shocking videos and creates astonishing three-dimensional models that help us understand how--and why--some of the world's most awe-inspiring catastrophes happened.
From airplane collisions to erupting volcanoes, SHOCKWAVE: THE COMPLETE SEASON ONE presents 13 episodes of the footage behind the headlines, and exposes the stories behind the world's most shocking moments.