The Ballad of Lefty Brown R

He never wanted to be the hero 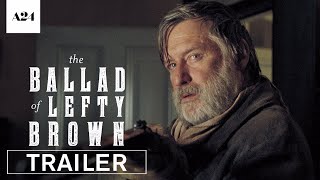 The Ballad of Lefty Brown | Official Trailer HD | A24

RogerEbert.com - 12/15/2017
"Pullman is always great to watch, the Montana landscapes are gorgeously captured by cinematographer David McFarland, and there are a couple of action set pieces that spark."
Los Angeles Times - 12/14/2017
"[T]his is a satisfying indie western, a dark and brooding film made with both a modern touch and real love for the genre."
New York Times - 12/14/2017
"[T]he likable, easygoing western THE BALLAD OF LEFTY BROWN tips its battered cowboy hat to its genre influences."

When a famous cowboy (Peter Fonda) is murdered in cold blood, his crotchety sidekick Lefty (Bill Pullman) is determined to lead his own posse and bring the killer to justice. Along the way, Lefty must learn what it takes to be a hero. Jim Caviezel, Kathy Baker, and Tommy Flanagan co-star in this Western, which was written and directed by Jared Moshe.

Customer Rating:
Based on 560 ratings.


Western fanatic, but this falls pretty short of a lot I have seen, they really do find it difficult to capture the genre nowadays, everything looks too pristine!