Rolling Stone: Ranked #75 in Rolling Stone's "500 Greatest Albums Of All Time" - "This album opens with one of the most exhilarating guitar riffs in rock & roll..." 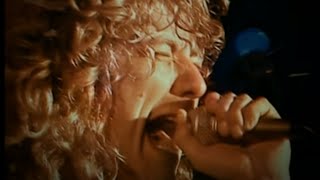 Led Zeppelin: Robert Plant (vocals, harmonica); Jimmy Page (acoustic, electric & pedal steel guitar, background vocals); John Paul Jones (organ, bass, background vocals); John Bonham (drums, tympani, background vocals).
Recorded in London, England and New York, New York in 1969.
Audio Mixer: Eddie Kramer.
Audio Remasterer: Jimmy Page.
Photographer: Ric Carter.
From the first grinding notes of the famous vamp that introduces "Whole Lotta Love," LED ZEPPELIN II announces for all to hear that they are the definitive hard rock band of their generation. But before the listener can even settle into the groove, things takes a hard left turn into a spacey new rhythm, exotically flavored by Page's droning feedback and innovative use of a violin bow. By tune's end, Zeppelin has repeatedly toyed with the listener's expectations.
This subversive quality distinguishes most of the arrangements on LED ZEPPELIN II, as in the soft/hard dynamic shifts of "What Is And What Should Never Be," the gospelish mood of "Thank You," the rocking vamps and funk rhythms of "Heartbreaker" and "Living Loving Maid," and the country music echoes of "Ramble On." And in their appropriations of source materials from Howlin' Wolf, Robert Johnson, and Sonny Boy Williamson, Page and company continued to mine the rich vein of the blues.