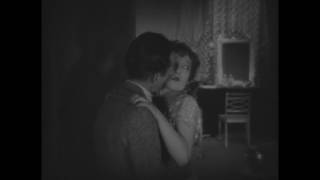 Written by Anthony Asquith, SHOOTING STARS is motivated by the sexual misconduct of unprincipled movie star Mae Feather, played by Annette Benson. Though married to her leading man Julian Gordon (Brian Aherne), Mae develops a craving for charismatic slapstick comedian Andy Wilks (Donald Calthrop). The heroine gives the comic the key to her apartment, informing him that her husband will be away for the weekend. But when Andy comes calling, Julian is still on the premises, and it doesn't take Julian long to size up the situation. He announces his intention to divorce his wife, an action which, thanks to a morals clause in Mae's contract, will ruin the actress' career. At Mae's urging, Andy schemes to kill Julian before papers can be filed, loading a prop gun on the set of Julian's latest picture with a "live" cartridge. Through a series of devilishly clever plot twists, Julian survives the murder attempt, but Andy himself is killed by the booby-trapped gun. Five years pass: Free of his deceitful wife, Julian has become a top director, while poor Mae has been demoted to an extra. Greeted with mixed reviews in 1928, SHOOTING STARS seems somewhat better today than it did then, primarily because of the detailed authenticity of the movie-studio scenes.