U2 Under a Blood Red Sky (Live) 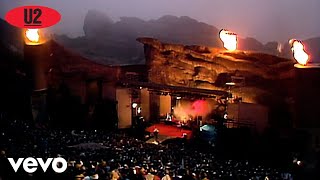 U2: The Edge (vocals, guitar, piano); Bono (vocals); Adam Clayton (bass); Larry Mullen, Jr. (drums).
Recorded live in Denver, Boston and West Germany on the 1983 "War" tour.
By the time of this 1983 live EP, U2 had emerged as the socio-politically conscious, self-determined saviors of rock & roll, their passion, musical power and sheer youthful exuberance making them rock idols to countless young (and some not-so-young) fans. This live document shows the ability of the band (particulary the zealous, proselytic Bono) to fire up a crowd with their earnest, anthemic approach. Early U2 classics like "Gloria," "I Will Follow" and the rabble-rousing terrorism protest "Sunday Bloody Sunday" are neighbored with fun obscurities like "Party GIrl" (complete with endearingly awkward guitar solo) and the moody "The Electric Co." As a final gesture of solidarity with his audience/congregation, rock & roll preacher Bono engages them in a spiritually tinged singalong on "40."