Outwit. Outspy. Outsmart. Outplay. Then get out. 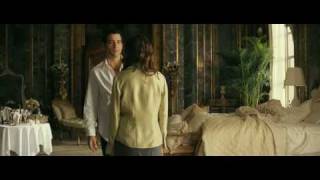 DUPLICITY is a slick, Soderberghian comic caper in which it's never exactly clear who is being conned. It's easy to see that ex-CIA agent Claire Stenwick (Julia Roberts) and former MI6 member Ray Koval (Clive Owen) have a heated history together when they embark on an elaborate mission of corporate espionage. Two rival CEOs (played by the always fantastic Tom Wilkinson and Paul Giamatti) are battling for the top spot in their industry, and a top-secret new product would determine who would wear the crown. But this isn't just about business innovation and profit: Claire and Ray have a plan that would help them get the prized formula and walk away with millions.

Tony Gilroy's previous work as screenwriter and director--namely the Jason Bourne films and MICHAEL CLAYTON--didn't give any indication that he could create something this bouncy and light. But while DUPLICITY is fun, it's never dumb; it jumps back and forth in time with style, playing an elaborate game that its scheming lead characters would be proud of. As Ray and Claire, Owen and Roberts display the same fiery chemistry that they showed in the gut-punching romantic drama CLOSER, but this time, they play (mostly) nice. If DUPLICITY can draw comparison to the classic genre bender CHARADE, then it's not a stretch to liken Owen to Cary Grant--he has an easy charm that ensnares not only each woman in the film but everyone in the audience as well.

Oscar® winner Julia Roberts and Clive Owen star as two sexy spies-turned-corporate operatives in the midst of a clandestine love affair. When they find themselves on either side of an all-out corporate war, they'll put everything on the line to remain one double-cross ahead in a high-stakes game of cat-and-mouse. From writer/director Tony Gilroy (seven-time Oscar®-nominated Michael Clayton) comes the film critics are raving about: “Roberts and Owen have sizzling chemistry in this instant classic.” (Lou Lumenick, New York Post)

Magic in the Moonlight
$19
Add to Cart