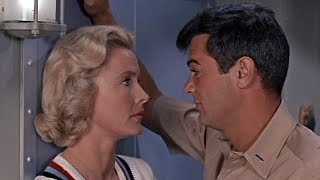 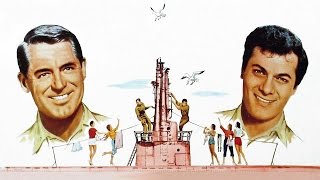 Cary Grant and Tony Curtis star as naval officers in this service comedy, one of the director's favorite genres. When Adm. Matt Sherman's (Grant) submarine, the Sea Tiger, is damaged during the attack on Pearl Harbor, he needs to find spare parts to have it recommissioned. Into the breach steps aide Lt. Nick Holden (Curtis), a master con man and wheeler-dealer who begins scheming to acquire the materials needed to fix the sub while the appalled Sherman looks the other way. Once the sub is deemed seaworthy, they stop at an island where Holden picks up a couple of Filipino families and five navy nurses who have been stranded there. The arrival of the extremely attractive nurses in the sub's cramped quarters has the predicted effect on the young, all-male crew, who soon find concentrating on their work to be an impossible task. The women also have their own ideas about the renovation of the submarine, one of which involves painting it pink. Despite the dated 1950s gender stereotypes, the comic genius of Grant and the energy of Curtis, in addition to a script witty enough to have been nominated for an Academy Award, keep the film afloat. Among the talented cast are Dick Sargent, Arthur O'Connell, Dina Merrill, Gene Evans, and Gavin McLeod, who would later return to the seas as the captain of THE LOVE BOAT.

Cary Grant is captain of a U.S. submarine in the South Pacific during World War II, and Tony Curtis is his thoroughly unethical junior officer. After the sub is damaged, it makes for port, where it picks up five extremely attractive army nurses. Academy Award Nominations: Best Screenplay.