It's a whole new west. 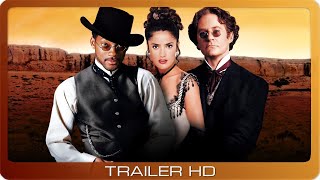 Barry Sonnenfeld is reunited with his MEN IN BLACK star Will Smith in this gadget-soaked romp based (loosely) on the 1960s television show. WILD WILD WEST supplies many impressive visuals (thanks to brilliant production designer Bo Welch) and some hearty laughs. Will Smith is James West, a Civil War hero and U.S. marshal inclined to shoot first and ask questions later. His partner is the wacky inventor and pseudointellectual Artemus Gordon (Kevin Kline). The team is created when the world's leading scientists are kidnapped by a diabolical madman named Dr. Arliss Loveless (Kenneth Branagh), and President Ulysses S. Grant (also played by Kevin Kline) wants his two best men on the job. Loveless's machines have the creepy fun feeling of EDWARD SCISSORHANDS (Welch again)--many of them have a spider motif--and Artemus Gordon rivals him with his own fun inventions. An odd but enjoyable blend of science fiction and old-school Western, WILD WILD WEST is packed with cool images and slick action sequences.

Based (loosely) on the 1960s Robert Conrad television vehicle, WILD WILD WEST is a classic buddy film: One man relies solely on his guns (or fists), while the other relies on intellect. James West (Will Smith) is a man of action, a Civil War hero, a ladies' man. Artemus Gordon (Kevin Kline) is a wacky inventor and master of disguise. President Ulysses S. Grant (also played by Kevin Kline, in a dual performance) forces the two to team up to save the world's leading scientists, who have been kidnapped by evil madman Dr. Arliss Loveless (Kenneth Branagh).

The League of Extraordinary Gentlemen
$6.60
Add to Cart

The League of Extraordinary Gentlemen (Blu-ray)
$10
Add to Cart