THE STORY OF A DESPERATE GIRL! 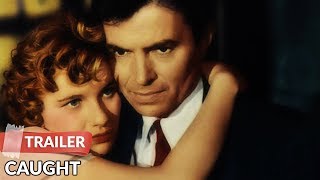 After a long career in Europe making costume dramas like MAYERLING TO SARAJEVO, Max Ophüls came to Hollywood. In CAUGHT, he attempted an American-style film noir with a heavy soap opera influence. Taken from a novel, WILD CALENDAR by Libbie Block, the script is by Arthur Laurents, most famous as the cowriter of WEST SIDE STORY. Barbara Bel Geddes plays Leonora Eames, a carhop who dreams of a better life. She enrolls in a charm school and succeeds in becoming a model. When she is invited to a swanky party on a yacht she at first declines the invitation, feeling she'll be just "one of those girls," which she definitely is not. But when she decides to go anyhow, she mistakes the millionaire host, Smith Ohlrig (Robert Ryan), for a deck hand. Though he is a cold, ruthless, workaholic playboy, she falls in love with him. When his psychiatrist suggests that he has a fear of commitment (no kidding), he marries Leonora in spite. She soon discovers that she's trapped in a loveless marriage. Showing pride and intelligence, she moves out and goes to work in a Lower East Side doctor's office. There she meets the handsome, dedicated doctor, Larry Quinada (James Mason), but doesn't tell him that she's still married, even as he falls in love with her. The ensuing complications are well-played and Ophüls lives up to his reputation for creative camera movement in this entertaining melodrama.