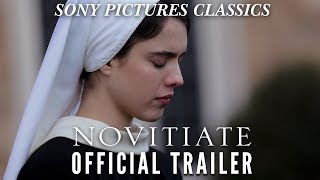 Los Angeles Times - 10/26/2017
"NOVITIATE sure-handedly takes us inside the world of belief with care, concern and a piercing, discerning eye."
Rolling Stone - 10/26/2017
3.5 star out of 4 -- "[Leo] gives the kind of bravura performance that not only sparks Oscar talk but richly deserves it."
RogerEbert.com - 10/27/2017
3 stars out of 4 -- "As the Reverend Mother -- a cruel leader who hasn’t set foot outside the convent’s gates in 40 years -- Melissa Leo is chilling and often deliciously over the top."
New York Times - 10/26/2017
"Ms. Qualley’s performance, and those of some of the supporting cast, notably Morgan Saylor and Rebecca Dayan, convey the difficulties these women face."
A.V. Club - 10/25/2017
"[Leo runs] the scale, from quiet stewing to full-fledged shrieking. It’s one of the year’s best supporting performances..."
Chicago Sun-Times - 11/03/2017
"The film is quietly confident in its look at the sacrifice involved in a life of faith. Kat Westergaard’s cinematography is classically warm, Christopher Stark’s score is stately and gentle."
Washington Post - 11/02/2017
"Betts has put together a talented acting ensemble, and the performances are, for the most part, uniformly good and subtle, particularly among the actresses who play the young novices."

A young woman named Cathleen (Margaret Qualley) decides to become a nun in 1950s Tennessee. As her training progresses, however, her faith is tested by the convent's Mother Superior (Melissa Leo), who is horrified by the Catholic Church's modernization as a result of the Vatican II reforms of the early '60s. Julianne Nicholson, Dianna Agron, and Morgan Saylor co-star. Written and directed by Margaret Betts.