Rolling Stone: 4 stars out of 5 -- "Her knack for heart-swelling choruses shines through on a set of tracks you might play while winning a marathon." 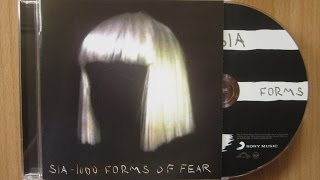 Rolling Stone
4 stars out of 5 -- "Her knack for heart-swelling choruses shines through on a set of tracks you might play while winning a marathon."
Entertainment Weekly
"FEAR shows off her ear for stentorian melodies, her quirky way with lyrics, and her astonishing voice, with its unplaceable accent." -- Grade: B
Paste (magazine) - "HOSTAGE is an upbeat throwback to decades past, as if electronic dance music never existed and doing a fast, fun, rock and roll song was still commonplace for a pop singer. It kind of rules."
Clash (Magazine) - "[W]ith tracks such as 'Big Girls Cry' and 'Fire Meet Gasoline' more than matching the output of her past clients in terms of captivating, powerful pop."

Audio Mixer: Manny Marroquin.
Recording information: Echo Studio, Los Angeles, CA; Hot Closet Studios, Echo Park, CA; Mad Decent, Atwater, CA; Magical Thinking Studios, Los Angeles, CA.
Photographer: Sia.
Talk about a sidelong entrance into a pop career: when the pressures of trying to make it as a star in her own right became too much after the release of 2010's We Are Born, Sia Furler became a songwriter for some of pop's biggest names -- but the hits she helped create, like David Guetta's "Titanium" and Flo Rida's "Wild Ones," ended up making her famous anyway. Even if it wasn't her plan, her time behind the scenes helped make the pop landscape into a place more hospitable to her charms. On 1000 Forms of Fear, it's clear that her time as a hitmaker for others not only brought her quirks into the mainstream, but also made the songs she kept for herself catchier. To be fair, We Are Born began this transformation; its unexpected but winning mix of new wave, synth pop, and R&B brought newfound polish to her highly personal style. Here, she simplifies her songwriting-as-therapy aesthetic even further, using broader strokes and bigger hooks to convey freedom from the past on "Burn the Pages" and "Straight for the Knife"'s shimmering death wishes. Alongside these less insular but emotionally complex moments are the sexy, sharp-edged "Free the Animal" or the all-consuming romance of "Fire Meet Gasoline," which any of her clients would love to call their own. Sia was wise to keep them for herself, though; even if the epic album opener "Chandelier" initially sounds like a demo for Rihanna -- with whom Furler shares an idiosyncratic, keening voice -- she gives it an entirely different kind of charisma, fueling the song's hedonism with giddy anxiety rather than tough-girl cool. Likewise, "Eye of the Needle" and the nearly seven-minute album closer "Dressed in Black" are high-drama ballads with more depth than the ones she writes for hire. That said, some of 1000 Forms of Fear's best moments recall her previous album's eclectic sprawl. "Hostage," a chugging guitar pop collaboration with the Strokes' Nick Valensi, offers a refreshing change of pace from the rest of the album's intensity (as well as a credit that stands out from the more expected likes of Greg Kurstin and Diplo). While it's not quite as original-sounding as We Are Born, 1000 Forms of Fear is an appealing balance of Sia the artiste and Sia the chart-topping songwriter. To say it's her most accessible album yet doesn't diminish it or her previous albums; instead, it's the sound of Furler owning her success. ~ Heather Phares

Sia
Some People Have Real Problems
$11.80
Add to Cart