Announcing the Most Magnificent Human Spectacle Ever Filmed! 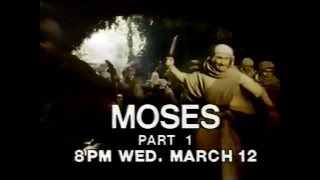 A spectacular movie which dramatically depicts the epic tale of Moses. Burt Lancaster plays the role of the biblical leader who led the children of Israel out of bondage. Convincing special effects.

Burt Lancaster stars in this internationally-produced and lavish version of the life of the famous Jewish Leaders.
Moses was brought up as an Egyptian by the Pharaoh's daughter, who discovered the abandoned Hebrew child floating in a basket in the river. When he grew up, Moses learned of his true identity, and left the pleasures of the palace to join his enslaved people.
Chosen by God as His messenger, Moses led the Jews from the Pharaoh's tyrannical rule. His biggest obstacle, however, was making his own people believe in the miraculous power of the Lord.

The Bible...In the Beginning
$10
Add to Cart