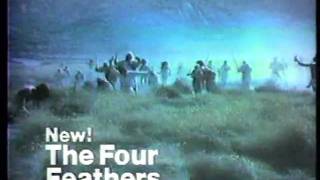 A stoic Englishman accused of cowardice sets out to prove his valor by helping his comrades in the Sudan Uprising. In order to return the Four Feathers (symbols of cowardice), he must commit four great acts of heroism.

In this TV adaptation and of A.E.W. Mason's 1902 novel, and remake of the 1939 film directed by Zoltan Korda, when a British army officer resigns his commission on the eve of the Sudan campaign, his fiancee and three friends send him four white feathers as a sign that they think he is a coward. To prove his courage, bravery, and heroism, the soldier, incognito, embarks on a dangerous quest by saving the lives of his former comrades.

The Wizard of Oz (75th Anniversary)
$7
Add to Cart

Harry Potter and the Goblet of Fire (FS)
$5.58 Winter Sale
Add to Cart

The Chronicles of Narnia: The Lion, The Witch, and the...
$9.10 Super Savings
Add to Cart