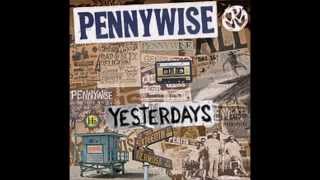 Personnel: Jim Lindberg (vocals); Fletcher Dragge (guitar); Byron McMackin (drums).
Liner Note Author: Pennywise.
Recording information: Screaming Leopard Studios, Hermosa Beach.
Photographer: Jim Lindberg.
Hermosa Beach punk stalwarts Pennywise take a look back and a look forward on their 12th studio album. Released in 2014, Yesterdays marks the return of founding lead singer Jim Lindberg (who had left the group in 2009) as Pennywise harks back to the muscular sound and positive outlook of the group's early days. The album also pays homage to Jason Thirsk, Pennywise's founding bassist, who left the group in 1996 to deal with his alcoholism, only to take his own life several months later. Yesterdays is dominated by several previously unrecorded songs Thirsk wrote for Pennywise, and the results are archetypical SoCal punk -- tight, powerful, and relentless, with an unending supply of power chords, rubbery basslines, and sharp drumming as the group rolls out 11 anthems of both anger and hope. Yesterdays is a heartfelt memorial to a fallen comrade as well as a reminder that Pennywise remember their roots well, and haven't lost sight of the ideas and ideals that drove them. ~ Mark Deming