A voluptuous female wrestler encounters corruption in the ring. 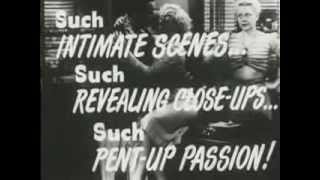 Female wrestler Peaches Page signs a contract with crooked sports promoter Umberto Scalli, whose gymnasium is a front for illegal gambling activities. Initially determined to focus on her career, Peaches works hard to make the grade but finds herself falling for Scalli - even though she's been warned off him by Ruby, the promoter's former girl friend. The romance could be short-lived: oily Umberto owes a fortune to local mob kingpin Mr. Big, and he's forced to decide whether or not to testify before a Senate committee investigating gambling - a course that could earn him a bullet in the head.

Originally titled Racket Girls, this delightfully cheesy melodrama produced by exploitation-film pioneer George Weiss (whose other "hits" included Glen or Glenda, Test Tube Babies, and Dance Hall Racket) exists primarily to showcase the spectacularly endowed Peaches Page, whose bountiful breasts seem to take on a life of their own as she jogs, jumps rope, and works out on a rowing machine. She plies her real-life trade in hilariously staged wrestling matches, which account for a sizable chunk of the film's running time. In the interest of verisimilitude, real-life champions Clara Mortensen and Rita Martinez join Peaches on screen, but that's where any attempt at realism ends. - Ed Hulse

A schlocky sexploitation classic about the women of professional wrestling. A.K.A. "Racket Girls."

Campy | Vintage | Exploitation
This product is made-on-demand by the manufacturer using DVD-R recordable media. Almost all DVD players can play DVD-Rs (except for some older models made before 2000) - please consult your owner's manual for formats compatible with your player. These DVD-Rs may not play on all computers or DVD player/recorders. To address this, the manufacturer recommends viewing this product on a DVD player that does not have recording capability.

Fighting with My Family
$8.40 Super Savings
Add to Cart