James Rosin's documentary on the birth of baseball in the City of Brotherly Love. 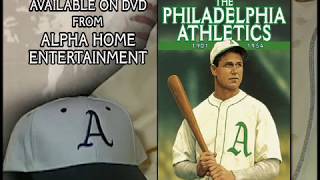 "A compelling account of the A's that marvelously conveys an old-time era!" - The Philadelphia Inquirer

From 1901 to 1054, Philadelphia's professional baseball team was the Athletics. This documentary examines those five decades of winning baseball that included eight trips to the World Series and stints on the club from such legends as Jimmy Foxx, Al Simmons, and Mickey Cochrane as well as famed manager Connie Mack.

Documentary | Baseball Players
This product is made-on-demand by the manufacturer using DVD-R recordable media. Almost all DVD players can play DVD-Rs (except for some older models made before 2000) - please consult your owner's manual for formats compatible with your player. These DVD-Rs may not play on all computers or DVD player/recorders. To address this, the manufacturer recommends viewing this product on a DVD player that does not have recording capability.

Reel Baseball: In the Movie Newsreels (DVD)
$10
Add to Cart