A kinky voyage with a full head of steam. 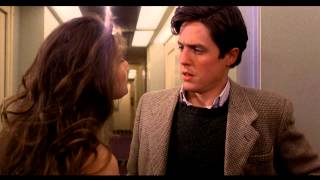 On a cruise to Istanbul in celebration of their seventh wedding anniversary, uptight British couple Nigel (Hugh Grant) and Fiona (Kristin Scott Thomas) encounter American expatriate Oscar (Peter Coyote), a wheelchair-bound unpublished novelist traveling with his young French wife, Mimi (Emmanuelle Seigner). Nigel is immediately drawn to the sexy but distant Mimi, and Oscar, sensing the other man's fascination with his wife, takes him aside to recount in exhibitionistic detail the sordid tale of their once-passionate love affair, which gradually deteriorated into a series of increasingly sadistic and degrading sex games. In flashback scenes, it soon becomes clear that the self-serving Oscar represents the corrosive element in the couple's relationship--though the tables will eventually be turned. BITTER MOON provides several jarring twists, the last of which is especially unexpected, and no one escapes unscathed from this titillating yet excruciating menage-à-quatre. Polanski's erotic melodrama received mixed reviews but earned ardent praise from fans who appreciated the filmmaker's return to the themes (first treated in 1962's KNIFE IN THE WATER) of dark sexuality and thinly veiled violence in intimate relationships.

A man whose torrid love affair with a younger woman has left him crippled and bitter tells his story of sexual obsession and dissolution to a stuffy Englishman aboard a luxury liner.