The Adventures of Huckleberry Finn

Mickey Rooney stars in Mark Twain's classic adventure story about a young troublemaker who helps a runaway slave escape to the North. 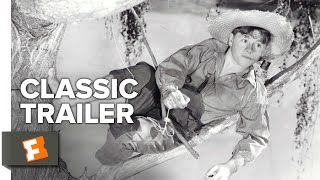 The Adventures of Huckleberry Finn is the Great American Novel. And Mickey Rooney is the great screen Huck Finn, the high-spirited heart of this story of Huck, a boy running from sivilization, and Jim (Rex Ingram), a man running from slavery. Together, they raft down the Mississippi into breathtaking adventure, pratfalling comedy and a soaring quest for liberty. Your favorite Huckleberry moments are here: skipping school to go fishin', escaping from his vicious Pap, meeting Jim on Jackson Island, donning a dress and bonnet to sneak into town, sharing the raft with comic conmen (veteran actors Walter Connolly and William Frawley) who call themselves the King and the Duke. Come aboard if'n you have a yen for "borrowed" dinner fixin's... and freedom!

The classic film version of beloved Mark Twain novel features Rooney in his first starring role. Considered by some to be the best of the many Huckleberry Finn movies, it was the MGM answer to the Selznick Tom Sawyer of the previous year.

Adventure | Friends | Classic | Scams And Cons | Slavery | Children | On-The-Run | Recommended
This product is made-on-demand by the manufacturer using DVD-R recordable media. Almost all DVD players can play DVD-Rs (except for some older models made before 2000) - please consult your owner's manual for formats compatible with your player. These DVD-Rs may not play on all computers or DVD player/recorders. To address this, the manufacturer recommends viewing this product on a DVD player that does not have recording capability.

The Count of Monte Cristo
$8.70 Super Savings
Add to Cart

The Adventures of Huckleberry Finn (DVD-R)
$16.20
Add to Cart