If society won't punish the guilty, he will. 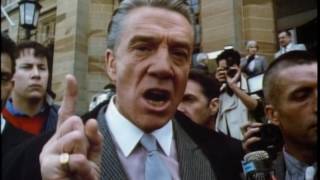 A veteran cop loses his family and almost his own life to a Mafia car bomb. Now a shadowy figure living for revenge lashes out at the crime world. Only the cop's ex-partner believes he survived the blast to become the punisher. But one thing is for certain, the guilty will be punished.

"The Punisher" details the exploits of the comic book antihero in his first and only screen outing.
After the mafia ices his wife and children, New York cop Frank Castle vanishes into the bowels of the city sewer system, nurturing his vengeance. He spends the next few years stepping out of and back into the urban shadows as he picks off Gotham's big-shot Italian gangsters.
Then Lady Tanaka, a smoldering Japanese crime-lord, enters this grim scene and heads begin to roll. Castle initially gets a kick out of her bloody antics and the newly cannibalistic underworld.
But when Tanaka and her cronies kidnap a rival's kids, Castle decides to intercede and show her exactly how killing is done in the Big Apple.