Ava Gardner was never more alluring than as the half-caste heroine of Bhowani Junction. 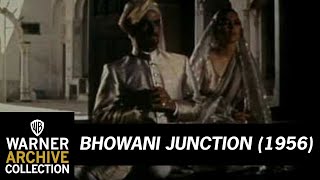 Ava Gardner was never more alluring than as the half-caste heroine of Bhowani Junction. Set during India's battle for independence from Britain, the film begins with Ava returning to her native land after spending several years in England. Her true loyalties, and her own sense of who she really is, are put to the test by the two men in her life: Stewart Granger, whose job it is to prevent saboteurs from destroying the trains at Bhowani Junction, and Bill Travers, another half-caste. When she kills a potential rapist in self-defense, Ava is given comfort by Communist insurrectionist Peter Illing, further dividing her fidelities. A climactic attempt on the life of Mahatma Gandhi provides a rousing finish to thisromantic melodrama. Bhowani Junction was adapted from the novel by John Masters.

An action packed romantic adventure, BHOWANI JUNCTION is an adaptation of the John Masters novel. This period film is a drama of chaos and revolt in which a young Anglo-Indian woman is forced to choose between her two races and twin allegiances when they are reflected in the men she loves. Ava Gardner plays Victoria Jones, a beautiful, half-caste young woman who returns to her homeland of India after World War II. She finds the country in a state of chaos, with the British military still occupying the land and Indians rioting to protest the foreigners' presence. When Victoria meets British colonel Rodney Savage (Stewart Granger), who is in charge of troops at Bhowani Junction; he promptly falls in love with her, however, she is in love with Patrick Taylor (Bill Travers), the Anglo-Indian rail superintendent. The film, which was shot on location (mostly in Pakistan) in CinemaScope, boasts a number of impressive, beautifully photographed sequences.

A period drama about racial conflict in which a young Anglo-Indian woman (Ava Gardner), returning to India, is forced to choose between her British and Anglo-Indian lovers. Directed by George Cukor, the film boasts gorgeous cinematography; it is based on a novel by John Masters, and also stars Stewart Granger.