This is my Story 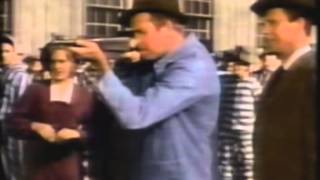 Oscar-winner James Stewart ("It's A Wonderful Life," "Mr. Smith Goes to Washington," "Vertigo") stars in the title role as a jailed bootlegger who invents the famed rifle and gains his freedom. Co-starring Oscar-nominee Jean Hagen ("Singin' in the Rain," "The Asphalt Jungle") and James Arness (TV's "Gunsmoke").

The tougher postwar screen image of James Stewart is given a good workout in the fact-based CARBINE WILLIAMS. In 1952, the world at large knew Marsh Williams as the developer of the US Army's M-1 carbine rifle. The film builds up to this event by detailing Williams' previous existence as a bootlegger and embittered prison inmate, sentenced to 30 years at hard labor for killing a revenue agent. After enduring the rigors of chain-gang life and solitary confinement, Williams (Stewart) gets his mind off his troubles by dreaming up a new type of automatic-gun piston. He is encouraged in this endeavor by prison warden H. T. Peoples (Wendell Corey), previously Williams' bitterest enemy. As Williams continues to develop his innovative weaponry notions, his wife Maggie (Jean Hagen) and Warden Peoples try to overcome penal bureaucracy to win a pardon for Williams. Some TV prints of CARBINE WILLIAMS have been colorized by computer; despite this artistically offensive practice, the strong dramatic and human values of the story still shine.

Prison / Prisoners | Prison | Guns | Biographical
This product is made-on-demand by the manufacturer using DVD-R recordable media. Almost all DVD players can play DVD-Rs (except for some older models made before 2000) - please consult your owner's manual for formats compatible with your player. These DVD-Rs may not play on all computers or DVD player/recorders. To address this, the manufacturer recommends viewing this product on a DVD player that does not have recording capability.

No Highway in the Sky
$19
Add to Cart

Customer Rating:
Based on 2090 ratings.


Jimmie Stewart plays this film as a low key cowboy, until he can't put up with the wrong anymore. Jimmie Stewart is good in anything he sets his hand to. As with many of the actors and actresses who were faced with death in real life, they know what is real and what isn't, and it comes through in their acting.