A kept woman finds herself drawn to a charismatic South American rancher. 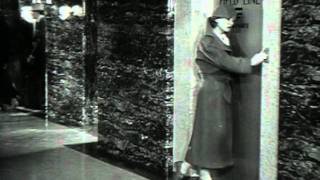 Whenever film icons Joan Crawford and Clark Gable co-starred in a film, there was always something to keep these two made-for-each-others apart. They might be from opposite sides of the tracks or opposite sides of the law... and sometimes just being the opposite sex was enough to draw them together and drive them apart. But the impediment was often another man. In Chained, it's Crawford's older lover (Otto Kruger), who gets the divorce Crawford's been hoping for just after she has a shipboard fling with Gable, leaving her torn between new romance and old obligation. For anyone who's curious about what made the Crawford-Gable team work, look no further than the banter-filled swimming pool scene. It's Screen Seduction 101.

In this love triangle, Crawford can't decide if loves Gable, whom she meets aboard a ship, or Kruger, the married businessman she's trying to forget. Pretty tame fare.

A woman takes an ocean cruise to get away from her married lover and meets another man. When she returns home, however, her lover divorces his wife, freeing him to marry her, and further complicating her life.

High Seas | Romance | Vintage | Betrayal | Love Triangle
This product is made-on-demand by the manufacturer using DVD-R recordable media. Almost all DVD players can play DVD-Rs (except for some older models made before 2000) - please consult your owner's manual for formats compatible with your player. These DVD-Rs may not play on all computers or DVD player/recorders. To address this, the manufacturer recommends viewing this product on a DVD player that does not have recording capability.