A healer must learn how to kill in this compelling Western. An army doctor takes command of a decimated cavalry unit under attack by Indians. 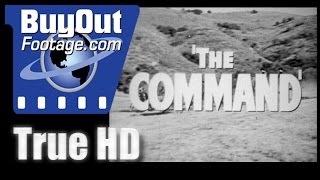 THE COMMAND was Warner Bros.' first Technicolor release. Guy Madison, then extremely popular with western fans by virtue of the TVer WILD BILL HICKOK, heads the cast as Army medical captain McClaw. When a cavalry commander is killed, McClaw, the next-highest-ranking officer, is forced to assume command, even though his combat experience is practically nil. Overcoming the resentment of the men under his command, McClaw is able to stem an Indian attack and rescue a wagon train--not through any sort of brilliant strategy, but by improvising as he goes along. Harvey Lembeck's comic-relief role as a grousing trooper was later parodied by Billy Crystal in MR. SATURDAY NIGHT (alas, this sequence was left on the cutting room floor when Crystal's film hit the screens). Also in the cast are aish MAGNIFICENT OBSESSION.

Action | Military | Native Americans | Medical | Training
This product is made-on-demand by the manufacturer using DVD-R recordable media. Almost all DVD players can play DVD-Rs (except for some older models made before 2000) - please consult your owner's manual for formats compatible with your player. These DVD-Rs may not play on all computers or DVD player/recorders. To address this, the manufacturer recommends viewing this product on a DVD player that does not have recording capability.

Westward the Women
$18 on Sale
Add to Cart