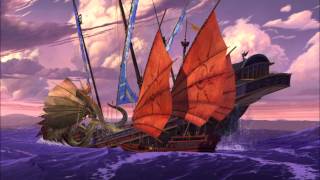 This rousing spectacle from Dreamworks follows Sinbad (Brad Pitt) and his band of pirates, who rob and pilfer their way through ancient times. Naturally this rogue will be redeemed, and the wheels go into motion when the Book of Peace, a hot property guarded by his good friend Proteus (Joseph Fiennes) and wanted by Eris, the evil goddess of chaos (Michelle Pfeiffer), winds up stolen. Sinbad is sent on a journey to return the book to its rightful owner, which means sailing to the uncharted waters of Eris' kingdom, through oceans laden with monsters and dangers at every turn. Stowing away for the ride is Proteus' beautiful and spunky fiancée Marina (Catherine Zeta Jones). Her presence allows for plenty of bickering and tortured romance in between the suspense and action-packed set pieces, which involve (among other things) tentacled sea serpents, sharks, and ghostly sirens. The animation is stunning: CGI effects merge with conventional 2D animation for ravishing, almost 3-D results. Pfeiffer has fun hamming to heights not seen since she played Cat Woman in BATMAN RETURNS, and adults will definitely relish the film's PG rating, which allows for a smidgeon more sensuality and violence than usual. The clever script by John Logan (GLADIATOR) provides such a wealth of jaw-dropping spectacle, cathartic action, and cheeky humor that the whole family should find SINBAD a fun voyage.

The Road to El Dorado
$8.70 Super Savings
Add to Cart