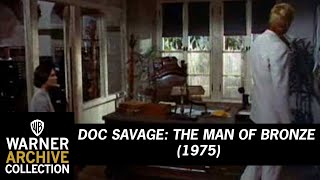 Based on the first of Kenneth Robeson's 181 adventure-packed Doc Savage books, Doc Savage: The Man of Bronze hits the screen with all its gee-whiz, gung-ho spirit intact. And its bold protagonist, who along with having a herculean body is also a surgeon, linguist and inventor, remains determined to do right to all and wrong to no one.

Ron Ely (TV's Tarzan) plays the strapping Savage in this high-camp, big-heroics tale of his trek into the Valley of the Vanished to confront the power-hungry Captain Seas (Paul Wexler). And behind the camera are pros who know how to get the most out of this entertainment bronze mine: veteran fantasy film producer George Pal (The War of the Worlds, The Time Machine) and director Michael Anderson (Around the World in 80 Days, Logan's Run).

Fine action feature based on Kenneth Robeson's well-known novels. Doc matches wits with an evil genius who killed his father and has plans for world domination.

Action | Justice | Vengeance | Theatrical Release
This product is made-on-demand by the manufacturer using DVD-R recordable media. Almost all DVD players can play DVD-Rs (except for some older models made before 2000) - please consult your owner's manual for formats compatible with your player. These DVD-Rs may not play on all computers or DVD player/recorders. To address this, the manufacturer recommends viewing this product on a DVD player that does not have recording capability.

19%off
Something for Everyone
$16.20 Super Savings
Add to Cart