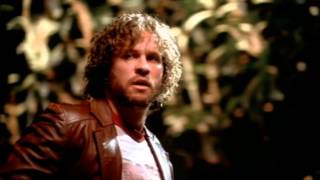 Fast cars, fast women, sex, drugs, and rock and roll, with guns and ammo thrown in for good measure--that was the world of porn star John Holmes in Los Angeles in the 1970s. But everything came tumbling down in June 1981 when he was accused of taking part in a multiple murder that forms the basis of James Cox's dizzying WONDERLAND. Val Kilmer, who previously embodied rock lead singer Jim Morrison in THE DOORS, transforms himself into the famous porn celebrity in this excitingly sordid tale of excess, which is told from the point of view of several different players, echoing Akira Kurosawa's RASHOMON. Under the stage name Johnny Wadd, Holmes was rumored to have had sex with more than 14,000 women in some 1,000 X-rated films; his dangerous life caught up with him when he died of AIDS in 1988. Cox has assembled an unlikely cast for this lurid story, including such well-known television stars as Lisa Kudrow (FRIENDS), Dylan McDermott (THE PRACTICE), and Christina Applegate (MARRIED WITH CHILDREN), in addition to Carrie Fisher, Janeane Garofalo, and Eric Bogosian, among others. In order to ensure accuracy, Cox hired Holmes's girlfriend, Dawn Schiller (played by Kate Bosworth), and former wife, Sharon Holmes (Kudrow), as consultants on the project. The handheld camera shots echo the wildness of the world of the man known as Long John Holmes.