A hoofer and a fake Russian countess are caught behind enemy lines at the outbreak of World War II. 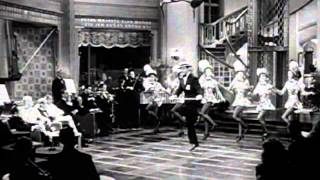 They first meet in Omaha. They meet again years later at the Swiss border... and at the edge of World War II. Clark Gable as smalltime hoofer Harry Van and Norma Shearer as his one-time honey Irene, now passing herself off as a Russian aristocrat and clinging to the arm of a munitions baron, strike sparks in this witty, cogent clash of love and war based on Robert E. Sherwood's Pulitzer Prize-winning play.

Idiot's Delight, released in the same year as Gone with the Wind, shows Gable at his rakish, manly, movie-star best. The most memorable scene: Gable's Puttin' on the Ritz, a wise-guy song-and-dance routine that ends with the King leaping gracefully into the arms of a chorus line of peroxide cuties. Lucky girls!

This exceptional political comedy, based on Robert Sherwood's Pultizer Prize-winning play, stars Clark Gable as Harry Van, a small-time vaudeville performer who, after years of touring vaudeville circuits and sideshows, has finally hit the big time in Europe with his all-girl review, Les Blondes. On the eve of WWII, Harry and his girls are temporarily detained at an Alpine resort with a very eccentric group of characters brought together under extreme circumstances. Two of the guests at the resort are millionaire Achille Weber (Edward Arnold) and his slinky Russian mistress, who claims to be a wealthy aristocrat. Harry knows better; he recognizes the pretty blonde as Irene Fellara (Norma Shearer), a small-town girl with big dreams whom he had met years earlier while performing in Omaha. After some amusing bantering back and forth and numerous denials on her part, he finally gets Irene to admit the truth. Irene had always dreamed of becoming a wealthy countess, but Harry convinces her that her act is a sham as they wait to discover their fate. With the war erupting around them, Harry and Irene fight to stay together. This fast-paced comedy is most remembered for Gable's song-and-dance routine to "Puttin' on the Ritz," the only time he sang and danced in a movie.

Politics | Stage Play | World War II
This product is made-on-demand by the manufacturer using DVD-R recordable media. Almost all DVD players can play DVD-Rs (except for some older models made before 2000) - please consult your owner's manual for formats compatible with your player. These DVD-Rs may not play on all computers or DVD player/recorders. To address this, the manufacturer recommends viewing this product on a DVD player that does not have recording capability.

The Petrified Forest
$16.20 on Sale
Add to Cart